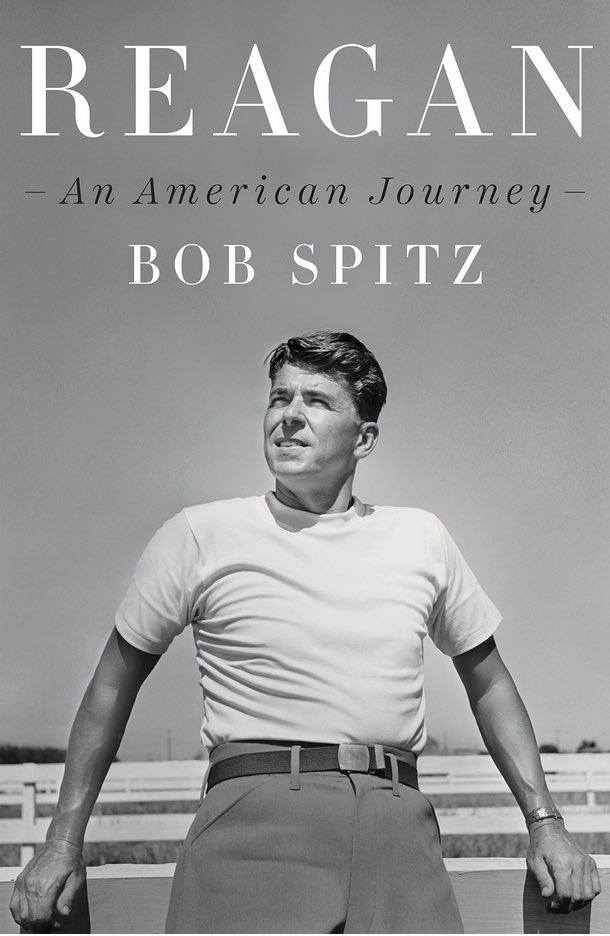 To order a personalized, autographed copy of Ronald Reagan: An American Journey or any of Bob’s other bestsellers, please click here.

Based on hundreds of interviews and access to previously unavailable documents, and infused with irresistible storytelling charm, Bob Spitz’s REAGAN stands fair to be the first truly post-partisan biography of our 40th President, and thus a balm for our own bitterly divided times.

It is the quintessential American triumph, brought to life with cinematic vividness: a young man is born into poverty and raised in a series of flyspeck towns in the Midwest by a pious mother and a reckless, alcoholic, largely absent father. Severely near-sighted, the boy lives in his own world, a world of the popular books of the day, and finds his first brush with popularity, even fame, as a young lifeguard. Thanks to his first great love, he imagines a way out, and makes the extraordinary leap to go to college, a modest school by national standards, but an audacious presumption in the context of his family’s station. From there, the path is only very dimly lit, but it leads him, thanks to his great charm and greater luck, to a solid career as a radio sportscaster, and then, astonishingly, fatefully, to Hollywood. And the rest, as they say, is history.

Written with love and irony, which in a great biography is arguably the same thing, Bob Spitz’s masterpiece will give no comfort to partisans at either extreme; for the rest of us, it is cause for celebration.

“This is the book so many of us have been waiting for: an epic life of one of the most significant presidents in the history of the Republic. In Bob Spitz’s graceful and absorbing narrative, Ronald Reagan emerges in all his complexity and charm, a warm yet enigmatic man who did so much to shape the way we live now.”
–Jon Meacham, author of American Lion: Andrew Jackson in the White House and The Soul of America: The Battle for Our Better Angels

A TOP TEN BOOK OF 2018
“This massive, spectacular biography isn’t just for Republicans or Reagan fans. Its novelistic approach is backed up with deep scholarship and original research, and its prose is by turns colorful and gripping.”
—Publishers Weekly

“A winning, clear-eyed biography recounts the story-book life of the 40th president, from midwestern poverty to Hollywood glamour to Sacramento, Washington, and the world stage … Mr. Spitz is very good on how Reagan spoke and wrote, and what it meant to him … Mr. Spitz’s prose is business casual: no tie, collar unbuttoned, blazer, loafers.  It keeps his many pages turning, and it knits his many venues — small towns, soundstage, summit meetings — smoothly together … Reagan: An American Journey is a handsome, handy introduction to the 20th century’s last hero.”
–Richard Brookhiser, The Wall Street Journal
Read Full Review Here

“This captivating and evenhanded biography of America’s first celebrity president, Ronald Reagan, reads like a novel but doesn’t skimp on scholarship…Despite pacing that keeps things moving at a steady clip, evocative detail abounds throughout… Spitz recreates such episodes as Reagan’s 1976 presidential primary challenge and the 1981 assassination attempt in gripping and sometimes even amusing fashion…Impressive research, including numerous interviews with a wide array of Reagan cohorts, from 1930s movie star Olivia de Havilland to national security adviser Robert “Bud” McFarlane, undergirds the exceptional writing…Readers need not be Reagan fans or Republicans to enjoy this outstanding biography.”
—Publishers Weekly, ★starred review

“Bob Spitz’s Reagan is a masterfully written and well-researched biography of America’s 40th President. All the crescendos and diminuendos of Reagan’s vibrant Hollywood and political careers are judiciously investigated. Truly engrossing and monumental!”
–Douglas Brinkley, editor of The Reagan Diaries

“No biographer has dug as deeply or with such verve into the making of Reagan the star…Energetic and engaging.”
–H.W. Brands, Washington Post
Read Full Review

“Reagan: An American Journey is remarkable for the three-dimensional humanity it reveals in its subject… This is an irresistibly talented and intelligent author, here telling a supercharged story.”
–Steve Donoghue, Open Letters Monthly
Read Full Review

“Readers seeking the freshest Reagan biography should welcome Spitz’s entry … and because the author is such a skilled stylist. the narrative flows smoothly. The major strength of this version is Spitz’s consistently diligent effort to provide context just beyond his main subject … A solid entry in the realm of presidential biography.”
—Kirkus Reviews

“Reagan offers a balanced, comprehensive view of Reagan and his legacy … Spitz manages to evoke Reagan’s heyday in the 1980s with compelling clarity — and to suggest how The Gipper’s legacy continues to shape 21st -century politics.”
—Christian Science Monitor
Read Full Review

“Publication of Bob Spitz’s massive biography of Ronald Reagan couldn’t be more timely.  The outlines of this story will be familiar to political junkies and policy wonks with long memories, but it’s told in lavish detail.  Spitz’s book … not only fills in many details, but will inevitably also be a significant marker against which to measure our current politics and political leadership.”
—Los Angeles Times
Read Full Review

“A clear style and a mastery of historic detail and nuance in [this] admiring but honest account of the life of the 40th president.  Reagan comes alive in all his beguiling complexity … This is a book that admirers and critics of Reagan will enjoy.”
–Michael Lindenberger, The Dallas Morning News

“A significant contribution to the Reagan literature.”
—National Review